In the Masai community where 13-year-old Richard Turere lives, cattle are all-important. But lion attacks were growing more frequent. In this short, inspiring talk, the young inventor shares the solar-powered solution he designed to safely scare the lions away.

My community, the Maasai, we believe that we came from heaven with all our animals and all the land for herding them, and that's why we value them so much. So I grew up hating lions so much. The morans are the warriors who protect our community and the livestock, and they're also upset about this problem. So they kill the lions. It's one of the six lions which were killed in Nairobi. And I think this is why the Nairobi National Park lions are few.

So a boy, from six to nine years old, in my community is responsible for his dad's cows, and that's the same thing which happened to me.

So I had to find a way of solving this problem.  [1] And the first idea I got was to use fire, because I thought lions were scared of fire. But I came to realize that that didn't really help, because it was even helping the lions to see through the cowshed. So I didn't give up. I continued.  [2] And a second idea I got was to use a scarecrow. I was trying to trick the lions [into thinking] that I was standing near the cowshed. But lions are very clever. (Laughter) They will come the first day and they see the scarecrow, and they go back, but the second day, they'll come and they say, this thing is not moving here, it's always here. (Laughter) So he jumps in and kills the animals. So one night, I was walking around the cowshed with a torch, and that day, the lions didn't come. And I discovered that lions are afraid of a moving light. So I had an idea. Since I was a small boy, I used to work in my room for the whole day, and I even took apart my mom's new radio, and that day she almost killed me, but I learned a lot about electronics. (Laughter) [3] So I got an old car battery, an indicator box. It's a small device found in a motorcycle, and it helps motorists when they want to turn right or left. It blinks. And I got a switch where I can switch on the lights, on and off. And that's a small torch from a broken flashlight. 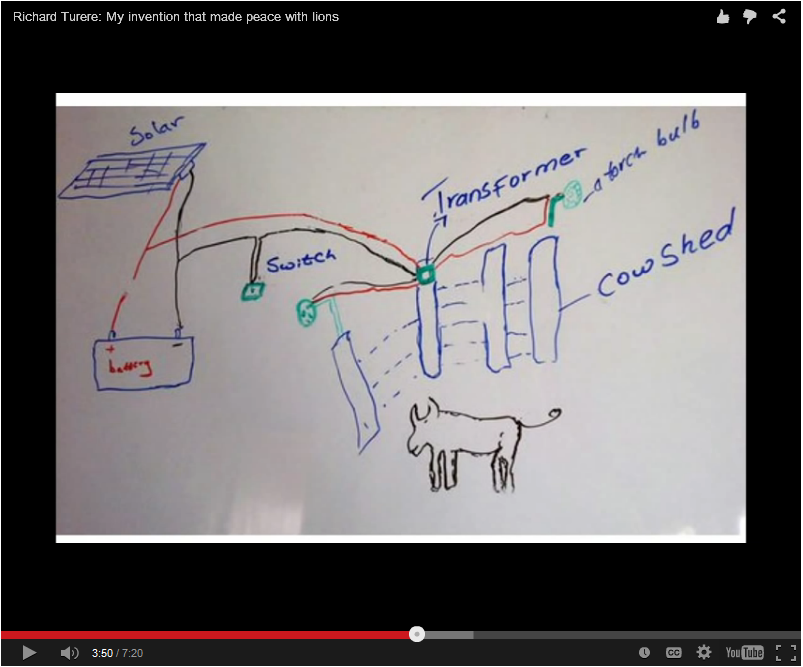 So I set up everything. As you can see, the solar panel charges the battery, and the battery supplies the power to the small indicator box. I call it a transformer. And the indicator box makes the lights flash. As you can see, the bulbs face outside, because that's where the lions come from. And that's how it looks to lions when they come at night. The lights flash and trick the lions into thinking I was walking around the cowshed, but I was sleeping in my bed.

So I set it up in my home two years ago, and since then, we have never experienced any problem with lions. And my neighboring homes heard about this idea. One of them was this grandmother. She had a lot of her animals being killed by lions, and she asked me if I could put the lights for her. And I said, "Yes." So I put the lights. You can see at the back, those are the lion lights. Since now, I've set up seven homes around my community, and they're really working. And my idea is also being used now all over Kenya for scaring other predators like hyenas, leopards, and it's also being used to scare elephants away from people's farms.

Because of this invention, I was lucky to get a scholarship in one of the best schools in Kenya, Brookhouse International School, and I'm really excited about this. My new school now is coming in and helping by fundraising and creating an awareness. I even took my friends back to my community, and we're installing the lights to the homes which don't have [any], and I'm teaching them how to put them.
So one year ago, I was just a boy in the savanna grassland herding my father's cows, and I used to see planes flying over, and I told myself that one day, I'll be there inside. And here I am today. I got a chance to come by plane for my first time for TED. So my big dream is to become an aircraft engineer and pilot when I grow up.

I used to hate lions, but now because my invention is saving my father's cows and the lions, we are able to stay with the lions without any conflict. Ashê olên. It means in my language, thank you very much.

What a delightful, instructive TED Talk by one Richard Turere.  I see his efforts as good thinking and sound problem solving.  In the transcript, I italicized key actions he took and numbered the three ideas he tried out, as he worked at solving a serious problem.  Indeed this young man is curious and inventive, and these traits help in problem solving, but the process he went through is something that we as leaders and staff alike, anyone really, also go through.  Finally, he has a generous, benevolent spirit: He installed his invention at other homes, and he taught friends how to install it as well, all without killing the lions.

Email ThisBlogThis!Share to TwitterShare to FacebookShare to Pinterest
Labels: Innovation and The ThinkBox