Importance of Thinking Inside the Box


"You know, Ron," one senior manager said to me, "I don't think we've perfected the hamburger." I was coaching this gentleman as part of a top-level development initiative by a top player in Quick Service Restaurants, better known colloquially and collectively in the US as a fast-food joint.

There was such buzz and such hullabaloo in the company about innovation, that it was easy, perhaps even tacitly expected, to get caught up in it.  Innovation is a long playlist that by itself is music to the ears of managers and consultants alike.  His CEO, back then, pushed an array of new menu items, from healthy fare to gourmet coffee.  I was bemused when I even stumbled on an article about a hotel concept they were considering.

How well do you think inside the box?

There is no questioning that innovation is critical to the success of any company and the growth of any country.  There is reason to believe, for example, that those enterprises that kept investing in Research and Development fared well during the recession.  Some were even innovative about the very process of innovation itself, that is, by opening their doors and fostering cross-company collaboration.  Crowd-sourcing creativity, as it were.

But I've had years of privilege and pleasure of consulting in many parts of the world, that when I hear anyone say "Let's think outside the box," I shudder inside.  Why?  Because I wonder if they can even think well inside the box.  Some, unfortunately, cannot.

Often the fundamentals of thinking seem to get the short shrift, I think, that young professionals and would-be leaders may not get the best schooling in this.  The ethos and the buzz of their university experience may be mainly about thinking outside the box. 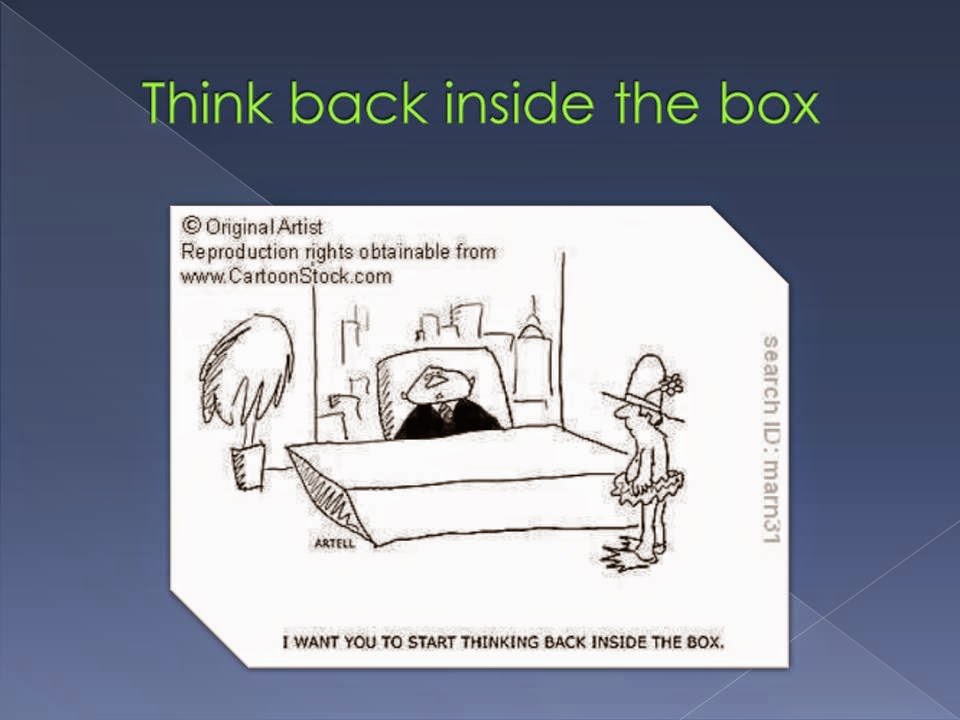 What does it mean to think inside the box?

It means looking at situations in a straightforward manner, first of all.  Complexity abounds in our world, but a good portion of what we face on a daily basis can be understood with simple, available paradigms in our arsenal.

It also means drilling-down, and looking beneath the problem to see its root causes and identify any process issues.

For example, in one company I used to work for, I learned that some service providers did not get paid more than a year after project delivery and that late payments were a long recurring problem.  Finance and accounting (F&A) was a wholly different function from ours, but our department often suffered the brunt of complaints from these service providers.

My colleagues were trying to solve these late payments on a case-by-case basis, when clearly it wasn't at all a one-off incident.  Besides aggravating us, it drew valuable time and effort away from serving our partners and clients.

All I did was simply to ask questions and to listen openly, and to show an earnestness to solve the problem and reduce such aggravation.  As it turned out, our invoice tracking efforts were weak.  So we solved this with clearer timings and regular checks.

Also, our communications with F&A were often procedural and therefore impersonal.  So we met with a key manager, explored the problem openly, and learned that one staff was primarily responsible.  She shored up whatever she had to deal with on the F&A side, and we agreed that once-a-month, face-to-face conversations not only kept accounts payable running well but also steered our relationship onto a more pleasant track.

So it's important to know when and how to consult with others, and with whom, and weighing decisions that require joint implementation in a frankly collaborative manner.

Can you spell accountability?

Finally, it's about following through and following up.  How well a problem is solved means, again simply, that it remains solved over time.  In our case, my colleagues took better care of the logistics and timings of accounts payable.  For me, all that was required was an occasional "How's it going?" and visit with our friendly F&A colleague.

Thinking inside the box does require looking at problems holistically, but the right solutions sometimes can be positively conventional, even low-tech.

In the end, there is very workable wisdom in getting back to basics.  There may be mundane yet philosophical value in perfecting the hamburger.

Posted by Unknown at 8:44 AM No comments: