I've worked for the best of them, I've worked for the worst of them.  Whether it was in Chicago or in Dubai, they were there.  Whether it was someone I consulted for or someone who was portrayed in case studies, they were there in numbers.  I'm talking about bosses, and while the opening of The Real Cost of Bad Bosses may seem like a salvo for the worst of the lot, the infographic is all apropos and it gets right to the point:

Want to give your team's productivity a real boost?  Take a look at your managers - and a long look in the mirror while you're at it.

In this article, I take the perspective of you as an executive, that is, someone highly-ranked in the company.  We'll look at the managers whom you, and your fellow executives, have installed.  We'll also look at issues from the standpoint of these managers' staff members.  But we'll begin with the man or woman in the mirror:  yourself. 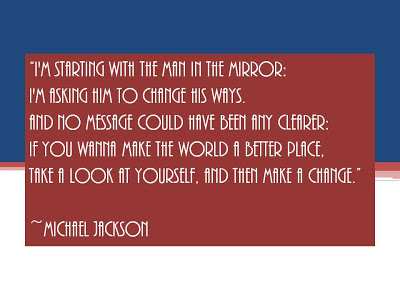 In Why Good Bosses Tune in to their People, Robert Sutton emphasized that leaders matter a great deal.  For better or for worse, what they say and what they do, not only reverberate across the organization, but are also mimicked by their direct reports.

One boss I knew was a knowledgeable, experienced and courageous man.  He confronted tough issues, whether in group or one-to-one meetings, and he was particularly deft in developing business with clients; his credits were in the multimillion-dollar range.  He gained the respect of those higher up the ladder, was promoted to senior manager, and eventually became my boss.

The problem?  He was hostile at best and abusive at worst, and while he paid lip service to teamwork, he did most of the talking and was mostly absorbed in himself.  One incident typified his leadership in relation to us.  He, two colleagues, and I were headed for an overseas project.  Our client was gracious to book us on business class for the flight.  As it turned, my boss was inadvertently bumped to economy class.  He chatted with the three of us, before takeoff, and made tacit requests to switch with one of us.  None of us budged.  In fact, one colleague half-jokingly said, "Enjoy your seat."

To make matters worse for this boss, I believe, was his frank narcissism.  Such a personality isn't inclined to step back and self reflect.  I can only imagine what he saw in the mirror every time he looked, but I am sure he saw little or none of his flaws.  There wasn't much indication that he was aware of how he behaved or how he treated us, and little apparent effort to change things.

So, then, even if you have to wrestle with yourself, psychologically, stepping back and self reflecting are crucial.  It may be helpful to ask yourself, as an executive, such general questions as 'How am I doing with my staff?  What can I do better?'  It may also be helpful to ask yourself about specific people or situations.  For instance, my former boss could've asked himself, once retired to his seat, 'What just happened with my staff?  How come no one bothered to offer a switch?  Is it something I've done or something about me?'

It was even more unfortunate that his own boss was not wont to confront tough issues.  He, too, was a smart man and a deft consultant.  But I imagine that he reveled in having promoted his staff member, who became my boss, because it deflected attention to, maybe even masked, a weakness in his leadership.  There were many reasons why I eventually left the firm, but the two of them were primary ones.

Still with the perspective of you as the executive:  How are your direct reports doing, in relation to their staff?  They are the managers, one level down from you, whom you have hired or whom you inherited from your predecessor.  Their Key Performance Indicators, if set up properly, ought to give you quite a good grasp about how they're doing.

But beyond these KPIs, do you have a pulse on their impact on staff?  That is, on leadership intangibles, those often unspoken factors that galvanize or demoralize a team.  Have a look at the following:

Besides performance reviews, you may want to arrange formal assessments of their leadership competencies, personality and values, if you haven't done so, yet.  Just as you have to take an honest look at yourself in the mirror, you need to take a similarly unvarnished, deeper look at your managers.  Having regular conversations with them helps, not just about business matters, but also about managerial issues.  If you and your managers don't have such conversations, as of yet, then it'll feel awkward at first and your managers may not be very forthcoming about issues.  But keep at it.  Promote trust and comfort in conversations with you.

I believe it is often best to take reality as it is and to view things as they are.  But a positive reframe of a negative attribute or situation is often helpful.  So let's do so for the above five flaws.  You can reflect on these reframed questions when you are privately reviewing your managers' impact, and you can weave them into your conversations with them:
If you're not inclined to weigh these intangibles or have such conversations with your managers, consider the hard figures about bad bosses that directly impact your business.

In his article for McKinsey Quarterly, Sutton offered pointed, practical advice on how managers can bolster their staff performance (with my comments).  The following are areas that you can coach your managers to do for their staff.

In the aftermath of some failure by your managers and their teams, for example, you must genuinely accept responsibility, especially when acknowledging this outcome in the organization.  You may have to confront, criticize and reprimand particular managers, of course, but do so privately, constructively and collaboratively.  They must get the message loudly and clearly from you, that they, too, must accept responsibility for failure vis-a-vis their staff and handle the matter forthrightly and respectfully.

There is enough stress or pressure on people in the course of running a business.  A good amount of this is part of doing their jobs, so Sutton is not recommending coddling them.  But it does mean defending them, 'protecting their back, and buffering them from undue lines of fire in the organization.

A thank you or good job may be the least utilized, most underrated tool in the managerial toolkit.  If you aren't using such tools in a more frequent, timely enough manner, then do so.  Coach your managers do take make these small gestures, too.  They may have other, even better ideas, in relation to their staff, so be sure to solicit these as well.

It goes without saying, of course, that for you to have credibility and impact with your managers, when you coach them on the above areas, you must do the same for them.

The impact of bad bosses on staff isn't just psychological or occupational.  It is also physical in a very real way.

Lousy bosses can kill you—literally. A 2009 Swedish study tracking 3,122 men for ten years found that those with bad bosses suffered 20 to 40 percent more heart attacks than those with good bosses.

As the executive, you have privileged access to staff information that HR houses.  What does the absenteeism picture look like?  What are the figures for payouts from staff medical coverage?  What trends do you see, from period to period, and do these trends synchronize, positively or negatively, with the hiring or assigning of particular managers?

Again, beyond the quantitative data, what is your pulse on how the staff are actually doing?  The best of staff may weather the psychological storm of a bad boss, but they are only human.  What kind of medical visits, treatment or stays are they having?  If you're not sure, find out.  Ask your managers.  Ask their staff directly.

The impact of bad bosses, and the ensuing disengagement from their staff, is nothing short of colossal:  Over $300 billion in lost productivity, within the US workforce, according to Gallup estimates.

Staff engagement offers one of the most compelling efforts an organization can initiate and sustain.  Engaged staff are those who are visibly and genuinely keen to do their job.  They understand what is most important to the organization, and they do their utmost to support it.  They 'go the extra mile,' when it comes to tough assignments or deadlines.

Moreover, they serve as a positive contagion in the team.  As the recession collapsed the world economy, in late 2008 and going into 2009, I encouraged my colleagues regularly via e-mail and conversation that we ought to count our blessings.  We may not always be happy with what the CEO is doing or not doing and we  may harbor frank displeasure about the direction of the company.  But we had the responsibility, to a person,  to our jobs well and to keep at it.

The model for great managing (below) comes from Gallup's ongoing research over several years.  The I, me and my refer to the staff member.  It is no accident, I believe, that great managers are defined, not by academicians, consultants or researchers, but by their own staff.  The very lives for which they have stewardship in the workplace and for which they have the responsibility to engage meaningfully.

I have absolutely no promotion arrangement with Gallup, so I can tell you this in all honesty:  In a previous company, key managers, colleagues and I brought this firm on board to help us raise our staff engagement.  Their model, research and professionalism were superb.  So you may want to consider them as well for your organization.

Short of that, you can use the above model in these ways:  (a) as a rough-and-ready barometer for the experiences and perceptions of the staff, and even those of their managers (i.e., your direct reports); and (b) as general guidelines for what their managers, and perhaps you yourself, may need to do to shore up shortfalls or concerns in staff engagement.

This model is in effect (c) a roadmap for becoming not just a good boss, but rather a great boss.